New plans for Melbourne’s second biggest stadium envision the Docklands venue transformed into a sports and entertainment hub like nothing else in the world. A blueprint for the soon-to-be-launched Marvel Stadium, obtained exclusively by the Herald Sun, reveals the stunning plan Disney has for the AFL-owned venue for the first time.

A Spider-Man-themed climbing wall, obstacle courses and ziplines are among the proposals. Hollywood-style searchlights that shine about 50m high into the Melbourne sky and a virtual reality zone are also part of plans to bring a slice of Disneyland to Docklands. Giant Hulk and Iron Man busts will tower 4m over the scoreboards, facing off at each end of the stadium. 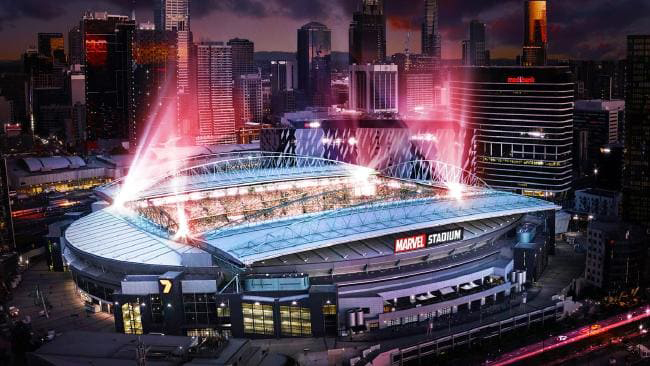 A Marvel megastore will be built at the venue, movies screened around the ground and film nights planned as stadium chiefs look to activate the venue on more than just match days. New Marvel exterior signs almost 5m high and 36m long will greet fans outside the stadium with state-of-the-art lighting. And striking images of Marvel characters will be plastered throughout the venue.

Disney Australia and New Zealand senior vice-president and managing director Kylie Watson-Wheeler said the stadium would break new ground as it became a 365-day venue. “There is nothing like this in the world,’’ she said. “This is a one-off for us as a business.’’ 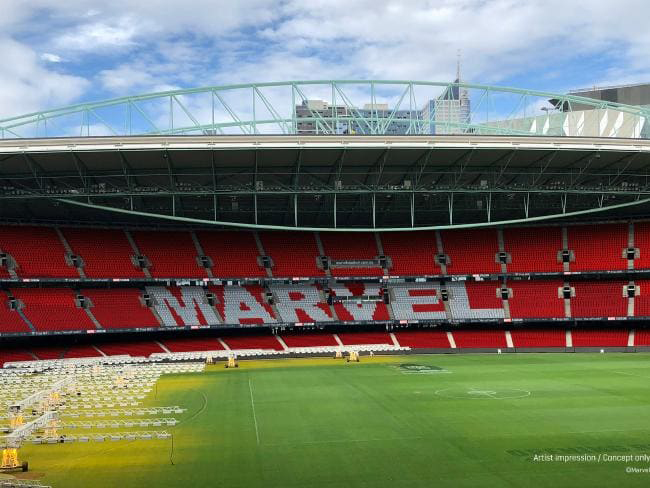 Soccer fans will be the first to experience the rebranded stadium when the A-League Melbourne derby is played on October 20.

But Ms Watson-Wheeler said widescale changes to the stadium would take greater shape in coming months. “I think it will be exciting from day one but the first day is just the beginning,’’ she said. “And certainly, how we bring this to life over time will be more and more exciting as we bring more elements to the forefront.’’

She said Disney had “all sorts of aspirations’’ for the venue. “We’re exploring different types of activations like climbing walls and ziplines and pretty exciting and fun things that the whole family can participate in.’’ 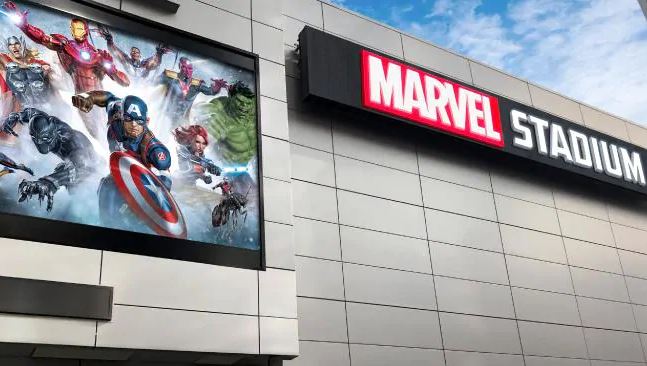 Event rooms at the stadium will be renamed after Marvel characters, under the eight-year naming rights deal. Etihad Stadium chief executive Michael Green said fans could expect new artwork, staff uniforms and signage from day one.

“From then on, I think you will see a gradual change as we become more interactive with the fan experience over the coming months,’’ he said. “Fans will notice from day one a discernible difference and that will only get better.’’ Mr Green said the changes would not interfere with any on-field experiences, and footy, soccer, cricket and concerts would operate as normal.