Central Pier was dramatically evacuated at the end of August due to structural integrity issues and will now remain a no-go zone for at least another four months, putting the jobs of 1,300 staff in limbo over the crucial Christmas period.

The main tenant at Docklands' damaged Central Pier is exploring legal options after the restaurant and event precinct was closed until at least next year due to ongoing safety concerns.

Development Victoria, the authority responsible for the pier, issued a formal notice to lead tenant Atlantic Group about midday on Tuesday warning that the site will remain closed until at least January 6.

The two bodies are now discussing financial compensation, according to Jobs and Tourism Minister, Martin Pakula.

Hatem Saleh, the chief executive of the Atlantic Group, said the decision by Development Victoria was “extremely disheartening and disappointing” and that communication from the body had been poor.

"It's very disheartening that Development Victoria could show such contempt in the way they dealt with us and really are not answering questions," he told ABC Melbourne radio.

"We have been there for the last 11 years, [and] for the last three years Development Victoria every two months has had divers and engineers and construction and waterway people rectifying and remediating the pier. For all intents and purposes they were maintaining it."

He said the pier, which was built in 1916, was the last remaining working structure of its kind in the city. "It's heritage listed, its marine history is unbelievable. Every other city in the world, London, New York, San Francisco, has managed to restore and reuse the pier but unfortunately it looks like in Melbourne a little bit of penny pinching and procrastination has neglected any ability [to maintain] its history."

Asked whether they would consider legal action, Mr Saleh said: "We will focus on our legal position for sure."

The spring and summer period is the busiest time for the eight businesses that operate at the pier, and Mr Saleh said about 100 clients had booked ahead for the next three or four years.

Restaurants and function venues were abruptly evacuated on August 28 after engineers told Development Victoria the area needed to be closed as it had rapidly deteriorated and wasn’t safe to use.

Engineers say a detailed assessment of the pier, which includes divers inspecting 1300 underwater piles and testing loads on top of the pier, will take another 15 weeks. The extent of the work and the time required to repair the pier will only be known once that assessment has been completed.

"We know how much this affects people’s businesses, jobs and events but the safety of people working on and using the pier has to be our number one priority," said Geoff Ward, the head of precincts at Development Victoria. 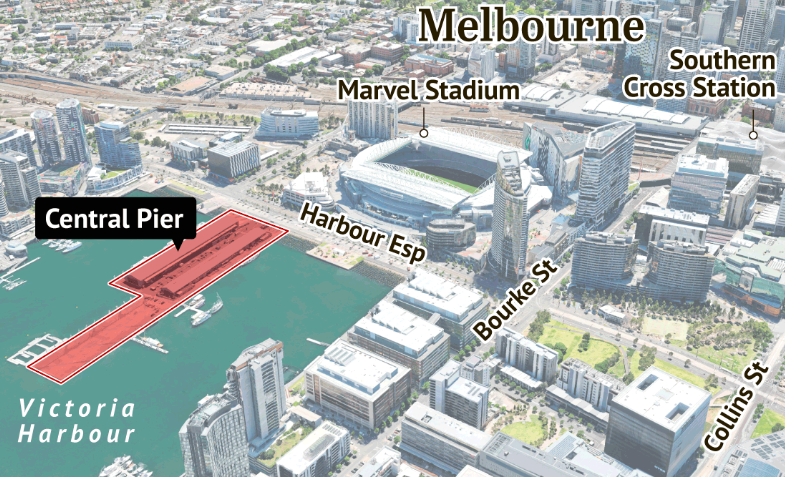 On Wednesday, Mr Pakula said the safety of the structure was paramount.

"Development Victoria is working with Atlantic Group to make some alternative arrangements with them. We obviously understand this is difficult for them, but the safety of people who work and visit that pier and the safety of the structure itself has to come first," he said.

"Development Victoria have examined that pier every two months since 2017. There's been work done to try and stabilise it but obviously the engineers have formed a view it's not safe in its current form and that's really got to be the priority.

The opposition spokesman for priority precincts, David Davis, said the government had to explain to the people whose jobs were under threat "how it failed to act" to prevent the closure.

"Daniel Andrews’ handling of Central Pier has been a complete shambles, bordering on incompetence," he said.

"The KBR engineers report must be released immediately. What is the Andrews Labor Government hiding?" Specialist marine engineers were brought in last month to analyse the condition of the pier. A safety protocol limits the number of divers and contractors to assess the pier to 20 people at a time, and the removal of items to less than 70 kilograms.

Stav Hatzipantelis, who runs audio visual and lighting design business Pro Light & Sound, said about a quarter of their work over the next year was at the pier and the ripple effect of the closure extended well beyond the tenants, venue operators and their staff.

"Everyone is concerned and worried about the tenants but it also has an impact on the rest of the entertainment industry and event community,” he said.

"My concern is no-one was transparent to the end clients ... You have people booking in weddings, they've taken time off from work and applied months in advance."

He said it was difficult to quantify how much business had been lost due to the closure, but thinks over the next few months it may be up to a quarter of a million dollars.

"It’s hard to put a dollar value. For example, one client found another venue at the park, but the chandeliers she booked and was going to have were three metres tall and the park is a different venue so we had to do three days work here at an extra cost.

"It’s hard to put a value on it, we didn’t lose the job, but it cost thousands on top ... the stress level is huge. It's unclear whether insurance will cover claims from the venue operators or other businesses, but Mr Hatzipantelis said he wasn't hopeful.

"I had a quick conversation with the insurance company and they said, well, who is to blame? It will only kick in if they chase somebody but who is to blame? They will have to wait to see the outcome of an investigation, which may take a year or two."

This article was published in The Age.